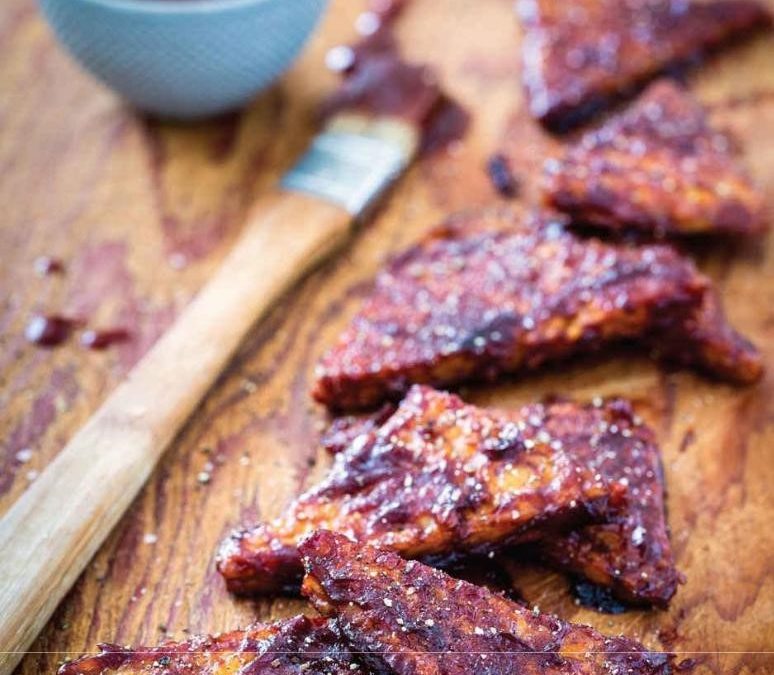 SERVES 4
PREP TIME: 3 minutes
ACTIVE TIME: 20 minutes
One 8-ounce package tempeh
1 tablespoon olive oil
⅔ cup vegan barbecue sauce (homemade or
store-bought)
Salt and black pepper to taste
1. Slice the block of tempeh in half
horizontally, then slice each half diagonally so
that you have four triangles. Slice each of those
in half horizontally to get eight triangles (they
should all be the same size of the original four
triangles).
2. Heat the oil in a large frying pan, preferably
cast iron, over medium heat. Add the tempeh
triangles and cook for 2 to 3 minutes per side,
or until each side has golden cooking marks.
3. Pour half of the sauce over the triangles,
spread it to cover them, then flip them over so that they cook in the sauce. Once that sauce has been
absorbed, repeat with the remaining sauce. Once all the sauce has been absorbed, remove from the heat
and add salt and pepper. Serve immediately. Keep leftovers in an airtight container in the fridge for up to
4 days.